Decide what you want to test

Your test needs to perform better or worse at something measurable. Ex: The number of users who click on a button.

High p-values indicate that your evidence is not strong enough to suggest an effect exists in the population. An effect might exist but it’s possible that the effect size is too small, the sample size is too small, or there is too much variability for the hypothesis test to detect it.

If your P Value is high, your hypothesis is not credible.

Type I: believing there is an effect when there is actually no effect

a type I error is the rejection of a true null hypothesis (also known as a "false positive" finding or conclusion; example: "an innocent person is convicted")

α (Alpha) is the probability of a type I error.

Type II: believing there is no effect when there is actually an effect

while a type II error is the non-rejection of a false null hypothesis (also known as a "false negative" finding or conclusion; example: "a guilty person is not convicted")

β (Beta) is the probability of Type II error

Power is 1-β, when high it means there is a low probability of type II error

If the effect you are measuring may be small, then you must aim to increase your sample size or you are likely to encounter a type II error.

If your sample size may be small, then you must aim to increase to your effect size or you are likely to encounter a type II error as well. 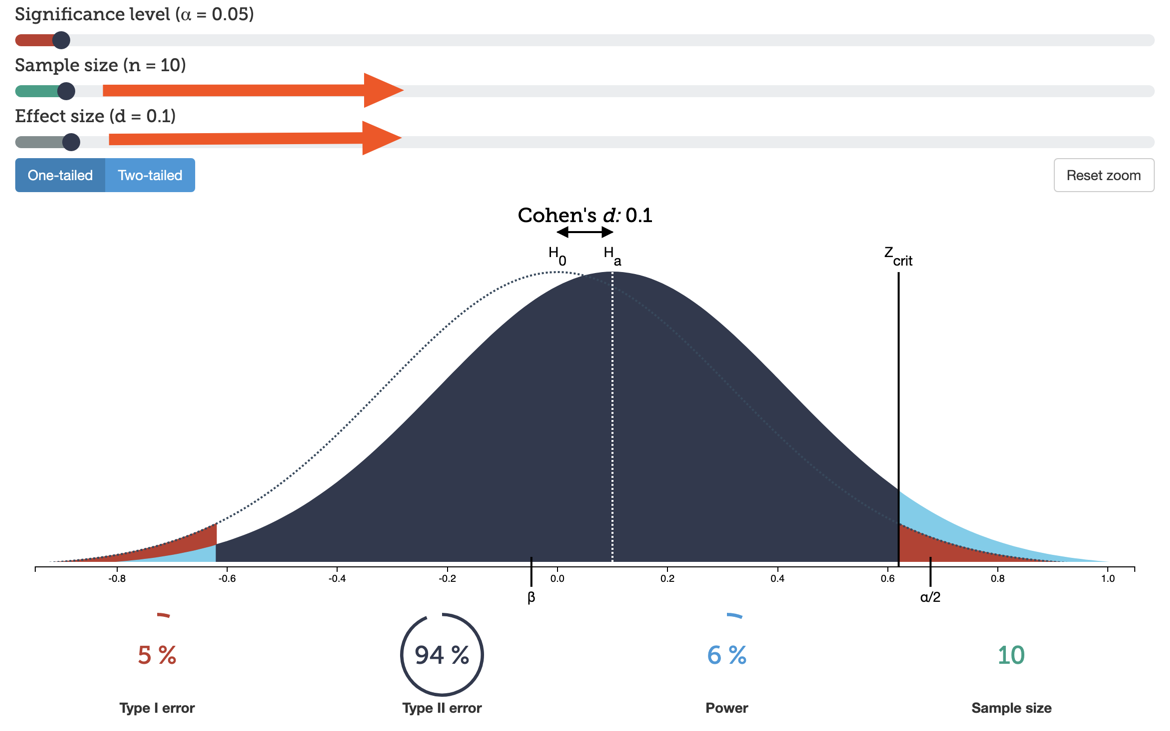 Look for variables that may not be easily manipulated, but have an effect on the outcome. For example, users on mobile vs. Desktop might have different click rates on buttons. Ensure data is split into groups in these cases, showing the relative effect on mobile and desktop users separately.

You should run more complex tests all at once rather than sequential tests. This is so that you don’t miss winning combination after excluding possibilities eliminated by previous tests.

“What is most likely to make people click? Or buy our product? Or register with our site?”

“We tend to test it once and then we believe it. But even with a statistically significant result, there’s a quite large probability of false positive error. Unless you retest once in a while, you don’t rule out the possibility of being wrong.”

when you’re working with large data sets, it’s possible to obtain results that are statistically significant but practically meaningless, like that a group of customers is 0.000001% more likely to click on Campaign A over Campaign B.

Above, if our hypothesis was “chance to click when viewing the page increases” and we collected some outcome results (clicked / didn’t click) after making a change and we got the shown sample, we could say that it did increase, with a confidence interval of 88%. Usually the interval is 95%, in which case we could not say that it would increase. To verify with a 95% confidence interval, we would need more samples.